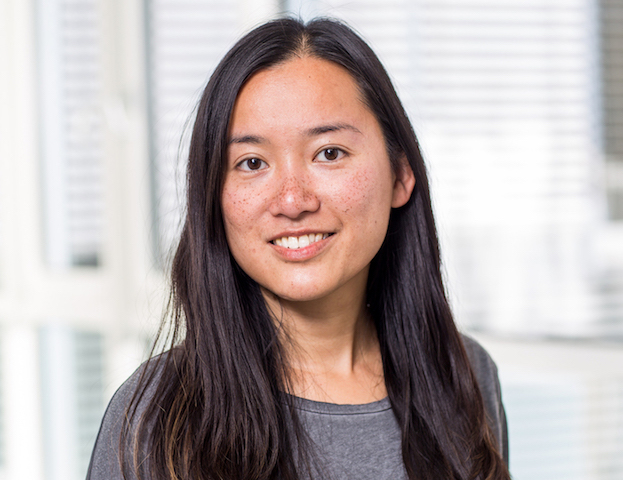 New Group Leader at the Faculty of Biology, University of Freiburg

Tuan Leng Tay is a Group Leader and Lecturer at the Faculty of Biology and Cluster of Excellence BrainLinks-BrainTools at the University of Freiburg. She is currently a Junior Fellow (2019-2020) of the Freiburg Institute of Advanced Studies (FRIAS) and also a Klaus Tschira Boost Fund Fellow. In 2018, she became the first female natural scientist to be awarded the Helmut Holzer Prize. Earlier, she studied biotechnology in Singapore, becoming interested in developmental biology in graduate school. She decided to move to Germany for her PhD in developmental neurobiology. After studying zebrafish development for a decade, she switched to the mouse dopaminergic systems in her postdoc at Columbia University. Later she returned to Freiburg as an independent postdoc and became interested in understanding the function of microglia in neurodegeneration.

The central nervous system (CNS) controls all our cognitive and physiological functions. Neurons are commonly recognised as the major brain cells responsible for learning and making memories, and as conduits of neurodegenerative diseases and mental health disorders including depression, schizophrenia, dementia, and Alzheimer's disease. However, a large part of our brain is composed of supportive cells known as glia, which are also active participants in these functions and pathologies. Microglia, which are CNS-resident macrophages, constitute 5-12% of all glial cells in the CNS. Unlike neurons and other glia, microglia do not have the same origin. Mammalian microglia originate very early from blood progenitors in the embryonic yolk sac and enter the brain cavity before the CNS is barely formed. They are distributed throughout the CNS in a highly specialised network and remain for our entire lifetime.

Like all organs, the CNS develops from finely orchestrated interactions between heterogeneous cell populations regulated by complex molecular signals. Genetic mutations or mild perturbations during development may induce severe consequences for tissue or organismal functions. Yet, evolutionarily built-in regenerative capacities exist to promote health, recovery and survival. The mechanisms behind the spatiotemporal resolution of inflammation induced in glia and CNS immune cells are poorly understood. The research goal of the Tay Lab is to understand these processes in order to harness the endogenous regenerative capability to modulate neuropsychiatric disorders, combat neurodegenerative diseases and aid brain tissue repair throughout the lifespan.

Recent technological enhancements in the past 1.5 decades enabled the direct visualisation of the constant surveillant activities, movement and expansion of microglial cells in real time, in developing, adult, injured, diseased, and aged brain. These opportunities propelled our understanding of other important roles of microglia in the CNS, for example, as housekeepers that maintain healthy brain state, as electricians that wire and connect parts of the brain, and as first responders and healers that lead to the resolution of diseases. The distinct properties between microglia and other brain cells make them an attractive candidate for the development of therapies and drugs that target the brain.

Our group is thus especially interested in understanding the organisation of microglial cells in different brain regions and their longevity within different contexts of brain health. Do all microglial cells accompany us from birth to death? What signals trigger them to alter their lattice-like network and expand in respond to injury or sickness? How do they regain their regular conformation when the brain has recovered? Having answers to these fundamental questions may enable us to manipulate brain defects in a targeted manner. Using a genetic mouse model, we were able to specifically label microglial cells in different colours to track their ancestry over long periods during health and disease. We found that microglial renewal is highly variable between brain regions. In a model of acute neurodegeneration, we showed that microglia responded to nerve injury via rapid clonal expansion and self-organised to regain the steady state network during recovery through apoptosis and migration of excess microglial cells. Single-cell RNA-sequencing unveiled novel microglial subpopulations with transcriptomic signatures associated with peak of disease and onset of recovery. Taking in silico and in vivo approaches, our group will investigate if the candidate genes and core regulatory modules we identified are critical for modulating early microglial development and post-disease restoration of the healthy microglial network. 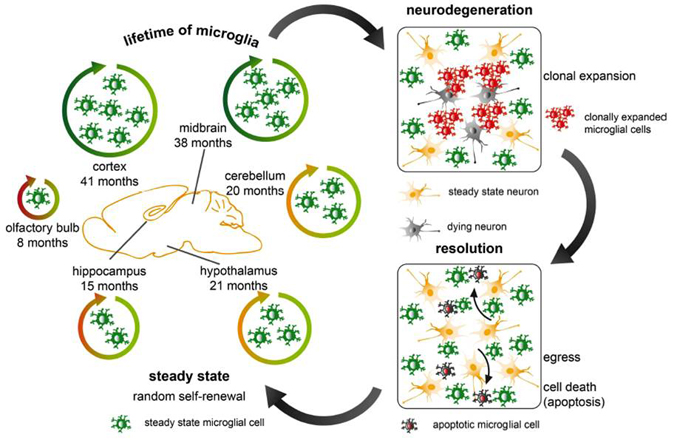 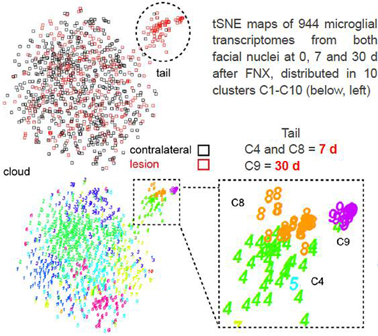 Cookies ensure the proper functioning of our website. By continuing your navigation, you accept their use.Learn moreI accept